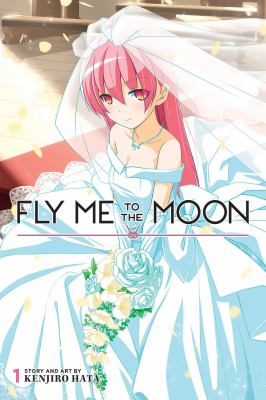 Fly Me To The Moon – Volume One story and art by Kenjiro Hata. Translation by John Werry. Touch-up art and lettering, Evan Waldinger

From the day his parents named him, Nasa Yuzaki has felt connected to outer space… whether he likes it or not. His efforts to outperform the space program veer off course when an accident introduces him to Tsukasa, a mysterious girl with strange powers. Is she an alien, a moon goddess or something else? Since she insists on marrying him, Nasa will have plenty of chances to find out!

This manga is recommended for people 16 years and older.

Fly Me to the Moon is a story about a kid named Nasa Yuzaki. He doesn’t like his name because it always reminds other people of N.A.S.A., the space agency in America. In his future, he would like people to just see him, when they see his name, so he strives to study hard, so that he can get into an elite school.

One day, he is out walking when he sees a cute girl in front of him, this causes Nasa to walk out in front of a truck. The girl disappears, but Nasa is so mesmerised by how cute she is, that he goes to look for her, even though he isn’t in a good physical state. He ends up finding her and tells her that he wants to be with her, so she tells him to marry her and he agrees. Nasa then passes out and ends up in hospital. A few years pass and he has turned 18, when he gets a mysterious person ringing his bell. It turns out to be the girl, and she has a marriage contract.

The rest of the story is Nasa being nervous around the girl, with both of them now living together.

This story is enjoyable in the fact that the boy keeps overthinking everything, which I can relate to. While the girl has a mysterious personality, which the story hasn’t revealed as of yet.

Even though the story was slow paced, it was still an enjoyable read and for this reason, I would give this title a 4/5 stars. I am definitely looking forward to more of the story in Volume 2.