Review – The Cheerleaders by Kara Thomas 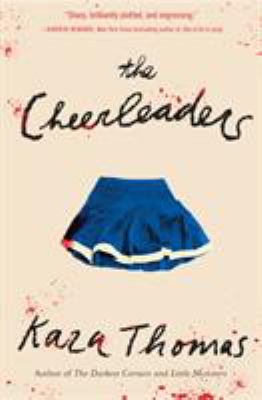 The Cheerleaders by Kara Thomas

There are no more cheerleaders in the town of Sunnybrook. First there was the car accident–two girls dead after hitting a tree on a rainy night. Not long after, the murders happened. Those two girls were killed by the man next door. The police shot him, so no one will ever know his reasons. Monica’s sister was the last cheerleader to die. After her suicide, Sunnybrook High disbanded the cheer squad. No one wanted to be reminded of the girls they’d lost. That was five years ago. Now the faculty and students at Sunnybrook High want to remember the lost cheerleaders. But for Monica, it’s not that easy. She just wants to forget. Only, Monica’s world is starting to unravel. There are the letters in her stepdad’s desk, an unearthed, years-old cell phone, a strange new friend at school. . . . Whatever happened five years ago isn’t over. Some people in town know more than they’re saying. And somehow, Monica is at the center of it all. There are no more cheerleaders in Sunnybrook, but that doesn’t mean anyone else is safe.

Also available as an eBook and an eAudiobook.

I really enjoy murder mysteries. I especially love ones where the person doing the sleuthing is not a police officer/investigator of some kind. I also have a very big soft spot for YA books, TV, and movies so this book really suits me.

When I saw it in the pile of new books, the first thing that caught my eye was the cover (yes, I do judge books by their cover no matter what my mother told me) and then the back page with the fabulous:

Beautiful.
Talented.
Popular.
Dead.
There are no more cheerleaders in the town of Sunnybrook.

I immediately reserved the book and I was not disappointed.

The main character, Monica Rayburn, lost her sister to suicide five years ago – she doesn’t quite believe that her sister, Jen, could have done it but it happened after four of Jen’s cheerleading friends died (two in an horrific car accident and two in a murder). Monica is not in a good place personally and has undergone an abortion just before the story begins.

Monica is looking for something else when she stumbles across two items in her step-father’s desk (he is a police officer who was involved in the investigations) that cast doubt on the murderer and so begins Monica’s ‘investigation’.

One of the comments on the cover likens the book to Veronica Mars (which I love) but I felt that one of the real strengths of this book was that Monica isn’t confident in her sleuthing skills and doesn’t even really set out to ‘solve the mystery’ so much as she needs answers and goes along this journey to get them. She stumbles and people lie to her and she doubts herself and she realises some people have lied and others who seem untrustworthy are actually trying to help. This adds to the realism for me because most teenagers wouldn’t be like the very cool Veronica Mars when solving a mystery they would be much more like the very believable Monica. I think this also works for me because it is reminiscent of cozy mysteries where the amateur sleuth bumbles along a little bit and some of the clues are accidents. Monica is also foiled by her sleuthing partner in Ginny because even though Ginny has no more experience in solving crimes she comes across as just a little more organised in the way she is approaching the mystery and is a bit more fearless. As a result, they work really well together.

I really enjoyed the flashback chapters. We get a few chapters from Monica’s sister Jen’s perspective to give us a glimpse of what was happening five years ago. They are really interesting and add depth that makes the reader more knowledgeable than Monica – not because anything new is generally revealed but because we get a glimpse into this life that Jen was leading that Monica wasn’t a part of (because she was just a younger sister) and can never know about.

As with all mysteries the last few chapters are where all of the answers are revealed and just when I thought that the mystery was solved, bam, the author hits us with another chapter that answers some breadcrumbs laid out in the narrative and changes everything.

I thought the author, Kara Thomas, did a great job capturing the teen voices and the way we can feel distanced from the people closest to us as a result of our own emotional state. As well as the way that people who have been on the periphery of our lives come to the forefront when we need them. Monica has two best friends, Alexa and Rachel, but the things she is going through make her feel distanced from them and she ends up gravitating towards Ginny who she doesn’t really know but feels more comfortable talking to and who helps her on her journey for information. This relationship made a lot of sense to me – sometimes the depth of history we have with people make it very difficult to share things with them that might not fit with your shared story and sometimes a new person can be just what we need as we are working through difficulties and I think the author captured that really well and very naturally so the relationship never felt forced. In fact, nothing about the story felt forced or unbelievable.

This book fits into the older brand of young adult fiction, that Michaela wrote about recently, and so it is for older teens but it is definitely a book I would recommend to them and to adults who enjoy YA fiction and murder mysteries.