You have probably noticed at Storytime how much we encourage children to practise their scissor skills. Scissor skills are incredibly important for children when they start school – if they don’t have comparable skills with their peers they have to spend the time catching up. Scissor skills are about a lot more than being able to cut something out. I’m going to touch on some of the reasons scissors help with children’s development.

There are lots of things that help develop this, drawing, gluing, colouring, etc. but cutting something asks for your hands and eyes to be working together in precision. Hand-eye coordination is used all the time: playing a ball, eating with a spoon, playing darts, using a tablet/phone, tying our shoelaces, picking ripe blueberries off the bush.

Fine motor skills refers to tasks that a precise, that utilise the fine muscles in our hands: writing, painting, eating, brushing your teeth, crocheting, lacing up a pair of shoes. The open and close motion associated with using scissors is great practise for those muscles.

Using scissors asks us to be focussed, to pay close attention to what we are doing. This is probably also the biggest reason parents worry about their children using scissors: that they won’t be paying attention and will cut themselves. Using scissors does so much for our focus and attention and the way parents watch and help shows children the importance of being in the moment with a pair of scissors.

This is one I mention to people a lot, as it’s also in evidence when you do incy windy spider. In our brains we have two hemispheres: left (which controls things done on the right of our body) and right (controls the left actions). When we are doing something like using scissors we are using both of these hemispheres at the same time, we are asking each one to control a different task however. One side of our brain is controlling the paper (which moves the paper in the pattern of the cut) and the other is controlling the scissors and the open/shut motion. Both are working together to create this one action through different movements. It’s one of the reasons that learning to use scissors takes us so long; it’s a very heavy cognitive load.

These are some of the main reasons that scissor skills are so important. 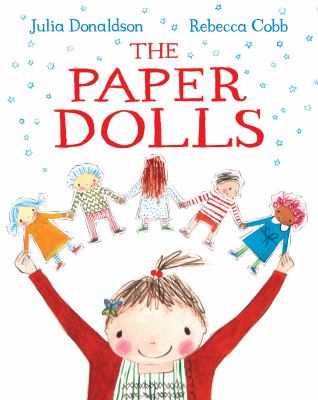 Paper Dolls by Julia Donaldson and illustrated by Rebecca Cobb

The breathtakingly beautiful story of one little girl and her six paper dolls. A string of paper dolls go on a fantastical adventure through the house and out into the garden. They soon escape the clutches of the toy dinosaur and the snapping jaws of the oven-glove crocodile, but then a very real pair of scissors threatens.

Describes the artist’s early sketching hobby, famous paintings, and the illness that confined him to a wheelchair and inspired his sophisticated paper-cutout masterworks.

I only vaguely know about Henri Matisse. I like art but I don’t tend to know many artists nor am I able to identify an artist by work alone (except Picasso, Van Gogh, and Jackson Pollock) and even with them I am just as likely to be wrong. All of this, gets us to the point where I knew of Matisse but I only knew him as a painter and I was unaware that later in life he was unable to paint and turned to cut-out art; an artist with scissors. 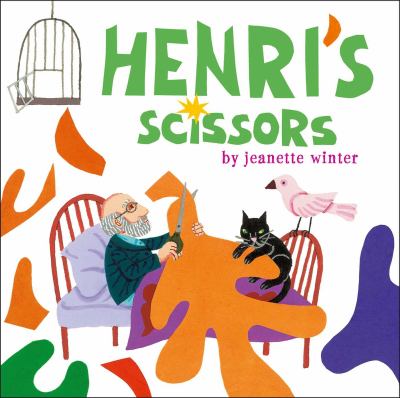 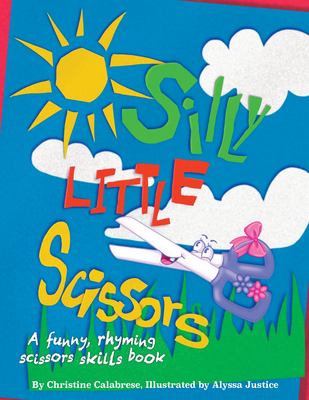 This colourful, rhyming picture book takes us on an entertaining trip through a lively classroom. Silly Little Scissors is making mischief in her class while the children beckon her to join them in their cutting lessions. But Silly really doesn’t believe anyone wants her friendship until the children finally convince her that she really IS important. Discover a delightful story that will add value and fun to your scissor skills lessons.

Getting into the classroom, this book does a wonderful job of sharing some of the ‘silly’ things we can do with scissors before scissors realises that they are very useful and the story starts to cover the ‘correct’ way of cutting and holding our scissors and how we cut. This is a lovely book suited to children who are using scissors – all of them!

Ape With A Cape by Richard Turner and illustrated by Deborah Sheehy.

Ape is a hairdresser giving the jungle animals interesting haircuts in this tale of transformations. Dashing Ape has an eye for design, a knack with scissors, and a desire to transform the coiffure of everyone in the jungle. Thus, he opens Ape with a Cape, the salon of his dreams. From buzz cuts to mullets, beehives to combovers, soon every animal is looking stylish.

Children from young ages go in for haircuts and seeing hairdressers wielding their scissors is a great example of the magic that these instruments can bring. This book is a fun look at different hair styles and ask the Ape says he only cuts so you know he uses scissors a lot. 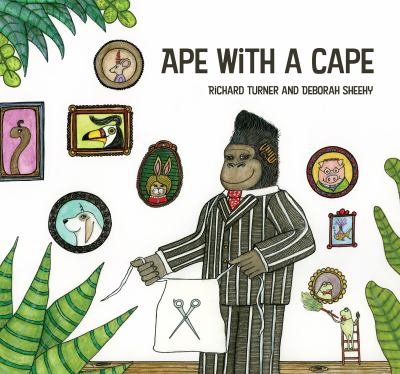 Can we talk about scissors without this game coming up…or how much fun can be had with glue once we have cut something? 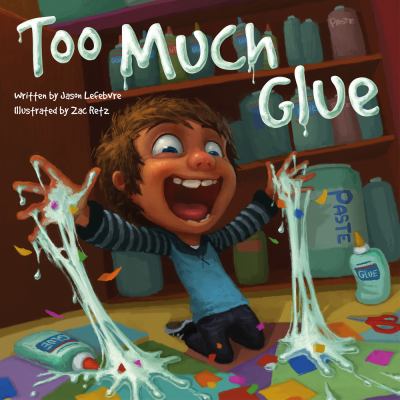 Too Much Glue by Jason Lefebvre and illustrated by Zac Retz

Matty LOVES glue. At home with Dad, he makes glue glasses, glue mustaches, and glue bouncy balls. But at school, Matty’s art teacher worries and warns, ‘Too much glue never dries.’ In art class one day, Matty decides to make the most fantastic glue project ever, with a super-special ingredient — himself! 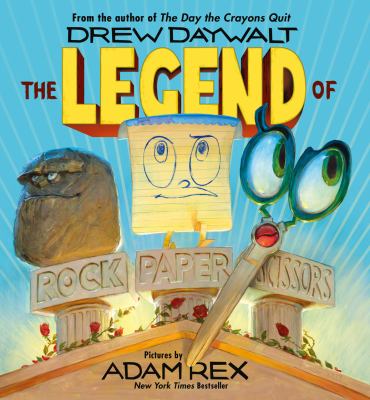 Long ago in the Kingdom of Backgarden lived a fearsome warrior named Rock. Rock was undefeated in battle, and yet, he felt unfulfilled. So he went in search of a worthy opponent. Little did he know that at that very moment two more warriors were setting forth with the very same idea. When Rock collides with Scissors from the village of Junk Drawer, and the ferocious Paper, who hails from the Empire of Mum’s Study, an epic and hilarious battle ensues. And the rest, as they say, is history.

I mentioned how long it takes us to learn to use scissors because of the cognitive load. But it’s also a lot for our muscles to learn so there are different stages of scissor use.

If you’ve spent some time with a child learning to cut you will notice that they keep trying to turn their wrist. This is, in part, because they want their fingers to do the work but when we are cutting our fingers are meant to remain stationary and proved the counter balance to the thumb which is doing the open shut movements. Our wrists can move but the paper should be controlled by the non-scissor holding hand. Talking about this with children will help them think about what they are doing.

Another thing you may notice is that children’s elbows go up when they are cutting, like wings. This is due to poor shoulder stability. Get a bit of cardboard and pop it under their arm to help them learn to keep their elbows in and develop the muscles and posture they need.

Tuck your elbows nice and tight,
Make sure you hold your scissors right.

Fingers on the bottom, thumb on top.
Do not let the paper drop!

Hold your scissors straight, not down.
Turn your paper round and round. 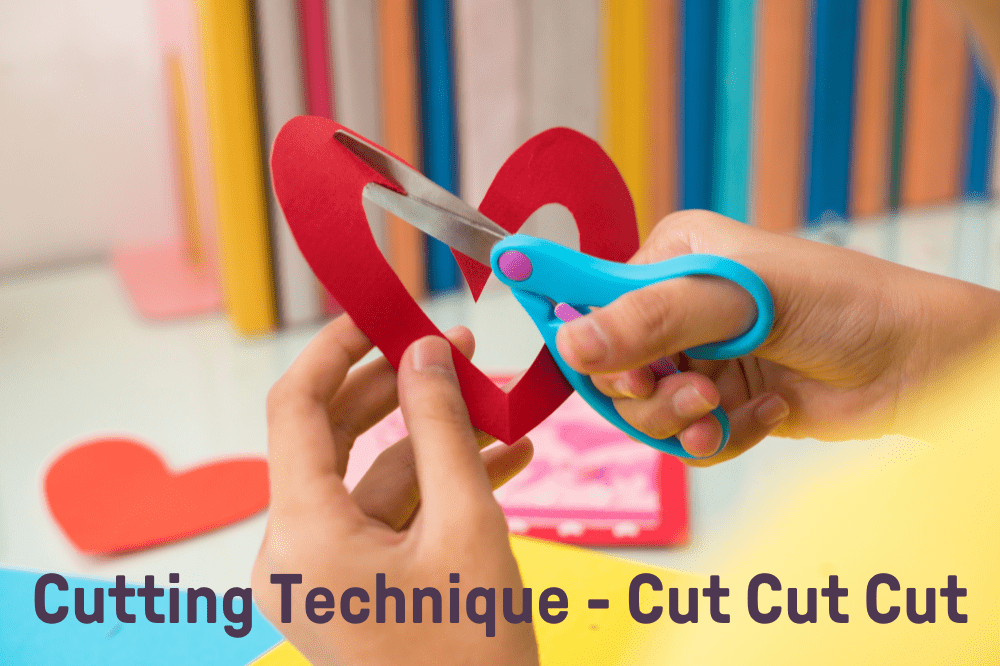 A little search on the internet will bring up all sorts of great activities for kids to practise their cutting skills. The one I’m going to talk about is one we used at the Olympics Storytime last year and you can see again at our celebration for the Winter Olympics at Success Library – Tuesday 15 and Friday 18 February. We hope we see you there. 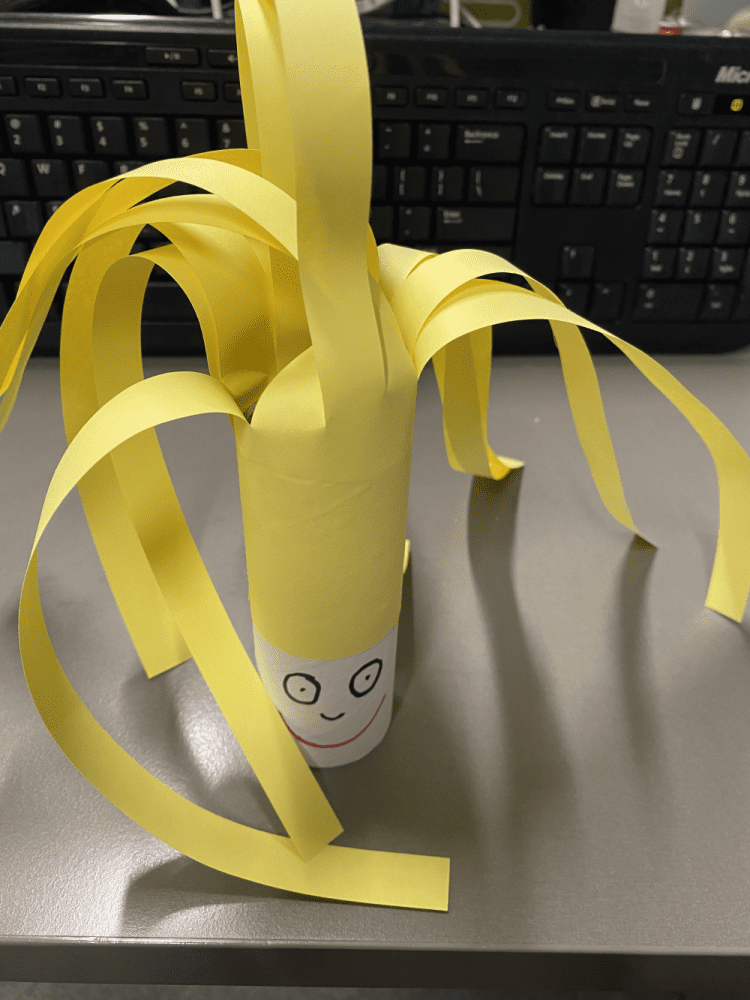 This activity is great, it doesn’t need to be perfect, the kids are able to practise and no matter how much or little they cut off they are hairdressers just like ape.