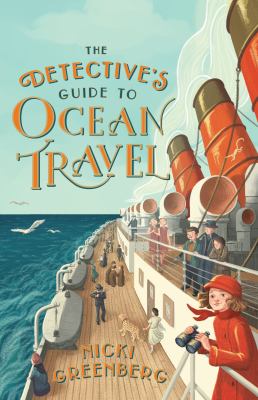 The Detective’s Guide to Ocean Travel by Nicki Greenberg

This book was part of the Shortlist for the Children’s Book Council of Australia’s Book of the Year Awards – Younger Readers.

For as long as she can remember, Pepper Stark has wanted one thing: to join her father, the Captain, aboard the magnificent RMS Aquitania on a voyage to New York. She has never been allowed to set foot on her father’s ship – until now. From the decadent food to the star-studded passenger list, travelling First Class on Aquitania is every bit as glamorous as Pepper had imagined. And most dazzling of all is American stage sensation Perdita West, wearing the world-famous Saffron Diamond around her neck. When the priceless jewel disappears mid-voyage, Pepper unexpectedly finds herself entangled in the crime. With the Captain’s reputation at stake, Pepper and her new friends set out to solve the mystery. But finding a missing diamond isn’t so easy on Aquitania, where everyone has something to hide …

Also available as an ebook.

I had a couple of thoughts early on I wanted to share before I get into the review, they could be considered spoilers but as they were at the time of the chapter I didn’t know what was coming.

Pepper Stark, our protagonist, is an only child whose father is an ocean liner captain.

Let’s get a few things out of the way early in my review, yes, every time I see Pepper Stark I do think pf Pepper Potts and Tony Stark from Iron-Man. Yes, I have seen enough Love Boat in my youth to picture the LOOOOOve boat. Thankfully the image on the front of the book and the author’s vivid descriptions help me to remember that both mental connections are not important to the book.

Back to my initial thoughts. Pepper Stark is determined, her father is an ocean liner captain and she wants to travel on the boat. She tries sneaking on board and wonderfully, gets caught, I don’t know why I was so surprised when this happened but I was and I am so pleased about it. But this prompts her father to finally agree to let her come on a voyage.

On the trip with her, and her governess, we meet a variety of people who are going to be important later; the blind man and his son, the actress with a leopard, the jockey, the others. But, Pepper isn’t Nancy Drew – she isn’t on board looking for mystery so I look forward to seeing how the mystery finds her.

A big question I have to ask is WHY?

Why was the diamond necklace still around Muffy’s neck during a swimming race? It feels to me like it should have been removed and Perdita should have been wearing it. Or is it integral to the plot? But also…whhhhhhhy?

While I was reading there were a few things I ad to research, in the Historical Note, which I flicked to at some point (but rest assured I didn’t read ahead) I found out that the boat is a real boat, so I did a little research (two videos below are interesting if you want to see more about the real-life boat).

Another book is quoted ‘The Lady’s Guide to Ocean Travel’ a few times in the book and read by Pepper’s governess Miss Quacken. Sometimes in these cases the book quoted is made up for the benefit of the narrative but in this case it is also areal book, though one by a different name: Ocean Notes and Foreign Travel for Ladies – Google Books

While I’m sharing some links; the author’s website is full of information about her books.

The book was really good. It feels a little like having read a younger version of Miss Marple or some Enid Blyton. My personal Enid Blyton mystery series was – The Mystery Series, no fancy name for my group, it was originally called the Find-Outers, with the first book being ‘The Mystery of the Burnt Cottage‘. Though I only had three books of the series which I read over and over and are in a box waiting to be unpacked. I definitely feel like those mystery books I read as a kid played a factor in thrillers/crime/mystery still being my favourite genre.

This books as a similar type of feel, the kids are solving a mystery but are not in any real danger for the most part, they develop a friendship over the mystery, there is a focus on food, dastardly adults and absentee adults (first rule of kids’ adventure books; get rid of adult) abound, and at the end off the day they prove to be much smarter than the adults…or maybe I should say more open-minded than the adults.

Nicki Greenberg uses wonderful, descriptive language throughout this book and even without really knowing much about ocean liners, or having gone to youtube for the above videos, you get a good idea of the environment and the characters. The book is an easy read but you can tell, looking at the language, that the author spent a lot of time and effort making sure that the setting was well designed and could so easily be pictured in he reader’s minds. It’s not always an easy thing to do but I feel like I spent time on the RMS Aquitania along with Pepper, Sol, Norah, and Toby.

I loved the solve, it was a beautiful touch and tied in the skills of each member of the children’s friend group in their own way. As I mentioned, Pepper didn’t go into it planning to solve a mystery, nor was she looking for one, but she was determined to help the people around her and she was steadfast in her motives. When obstacles came her way, she had two options give up (which would have been what those adults we mentioned wanted) or stand up and keep going. The elements of uncertainty, the moments when she really contemplated giving in, the parts where she was thwarted or just plain wrong, all come together to make for a very interesting and enjoyable character arc. None of the children come across as that very off-putting brand of precocious you see so often where the children really need an adult to step into their lives and set some boundaries but instead each child is out there in the real world doing the best they can to do the best they can. They have dreams: to sail across the ocean, to be a pastry chef, and to be a famous singer and they come together because they are all out striving for those dreams.

The book was such an enjoyable read, with a wide range of characters and set in such an interesting setting that I’m not at all surprised that it made it to the shortlist for the Children’s Book Council of Australia’s Book of thee Year award for Younger Readers. If it does win, it will make Nicki Greenberg a dual winner. Her book Hamlet won the 2011 Children’s Book Council of Australia’s Picture Book of the Year award though it is no longer in print. I liked it so much I am going to try and get my twelve year-old niece to read it too and would recommend it for anyone who enjoys adventure and good friend groups in their books.

A sequel is coming this year – ‘The Detective’s Guide to New York City’ meaning this won’t be the last we read about this fabulous foursome.