Why are rules important?

Prior to COVID-19 closing the library, I wrote a blog about Barriers. Specifically, in regard to the physical barriers people put up to keep people away and keep different groups separate. Today I’m going to be talking about rules. These two themes are intertwined; barriers and rules share the central idea of doing something or not doing something/having access or not having access.

Rules are a lot easier for children to understand, though barriers can be very real for them too – for example, an older sibling’s shut bedroom door. Rules impact on us from a very early age because rules are how we keep people safe, how we show children acceptable and unacceptable behaviour and they impact on us all in big and small ways.

Rules are a social contract and a social construct, we as a society choose to create rules and laws and to abide by them and if we do not there are consequences to our actions. Part of rules being a social construct is that they differ from family to family and across social, cultural and religion groups. It’s an important part of talking about rules to explain this to children as they will see other children behaving in a way that differs from their experiences or even that they may have been ‘told off’ for previously.

Rules can be unspoken or specifically laid out, they can be more of a social/familial custom than a specific rule. An example of this from my childhood is that my dad always had a specific seat at the table, as did my mum (though hers was more practical than anything else as it put her closest to the kitchen) and there was no rule that said no one else could sit there or even that it was his chair, also he wouldn’t have cared if we sat there but it became so much of a habit that it was almost a rule and no one broke it. Alternatively, it is a rule that if I am eating with my niece I have to sit next to her (yes, she made up the rule) and in this case it’s specifically spoken about and enforced by a 10 year old.

All of this is why rules can be hard because there are shades along the spectrum of rules. On one end, you have my dad’s seat at the table that isn’t enforced all the way along the line past no running in the house which might not always be enforced, through no lying which we might sometimes get away with, by no hitting for which there are always consequences, through to BIG RULES – laws for which there are set guidelines and the penalties can be serious.

Luckily for kids we start with the easier rules, we start with rules that govern ourselves, our behaviour, our bodies, and the people who are an active part of our life.

There are two really tricky things for kids when it comes to rules: 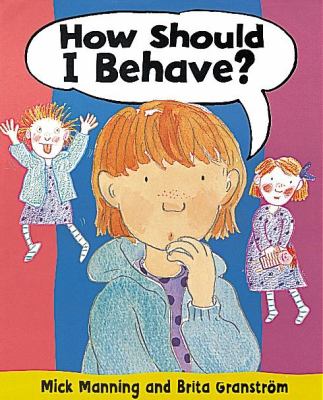 How Should I Behave? by Calista Brill and illustrated by Jennifer A. Bell

Taking a friendly and practical look at manners and the appropriate way to react and conduct yourself in a particular situation, this title examines a range of scenarios. It covers the simple effectiveness of please and thank you and mealtime manners, to the rather more scary situations of how to deal with bullies and stranger danger.

One of the biggest questions kids have is

This book helps to answer that question and many more about behaviour and rules. How should I behave? What’s polite? What’s nice? It touches on burping, farting, and toilet behaviour as well as sharing and lying. The book is straightforward and covers lots of topics so you can read the whole book or use it as part of a specific conversation.

This is a charming story about growing up and the behaviors that one must learn to let go of. Essentially, it focuses on the ambivalence of the young child about giving up fun younger behaviors, yet wanting to be more grown up because actually the things you CAN do when you’re 8 are a lot more fun than spitting and making faces! It’s the child’s shock at the imposition of “polite behavior” by the parents, resistance to giving behaviors up, and the gains in behaving more maturely. That sequence is what parents need to know about.

One of the things that children need to learn as they grow older is that behaviours that were acceptable at one age are no longer acceptable at an older age. This book deals with that transition period where children are learning new behavioural guidelines of socially acceptable behaviour. Published by the American Psychological Association, it also has information for parents around rule setting and talking to children. 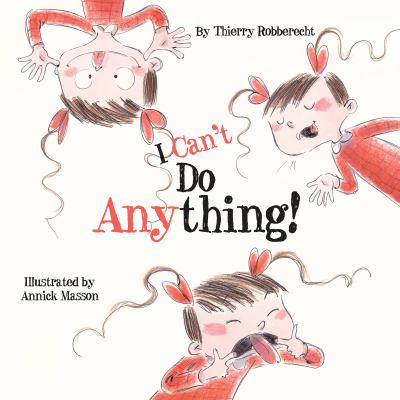 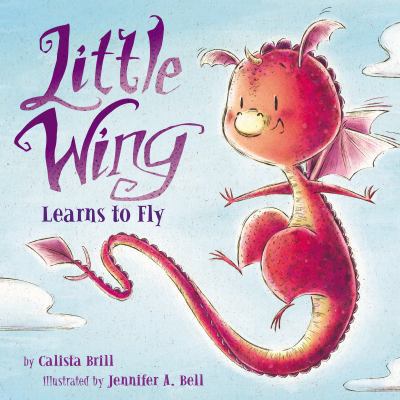 Little Wing Learns to Fly by Calista Brill and illustrated by Jennifer A. Bell

No matter how hard Little Wing tries to fly, it’s always flip, flap, flop until one day when his fluttering takes off and he finds himself high above the clouds. But now that the sky is the limit for Little Wing, he has to find his way home. It takes a special someone to teach Little Wing the importance of the dragon rules and to help him be flip, flap, fearless!

Little Wing is struggling to fly, but in a great example of perseverance Little Wing keeps trying. Eventually Little Wing is able to fly but instead of listening to Mum and coming down to learn the rules Little Wing gets caught in the wind and ends up somewhere far away and scary. There is a happy ending, Mum finds Little Wing and they are safe again. But then they have a conversation about the rules, and through the story Little Wing is also shown why rules are important. Situations like the one that arises in the story allows children to see the consequences – to see what happens when we don’t follow the rules, in a way that is safe. They are not in danger – the character is. And we know there will be a happy ending but we can also take away that lesson we have learned. On top of that, it’s not learned through being ‘told’ what happens but through experience and children are given the opportunity to work out the why for themselves.

That Rule Doesn’t Apply to Me! by Julia Cook and Anita DuFalla

The rules keep getting in the way of Noodle’s fun. There are so many rules — too many rules! And Noodle struggles because he doesn’t think many of them actually apply to HIM. Will Noodle’s mother and teacher convince him that rules are meant to help, not harm, him?

Everyone has rules they ignore because they have a REALLY GOOD REASON, this book deals with that idea. Noodle doesn’t follow rules because they don’t apply to him; he has a really good reason for not following them. He keeps getting caught breaking the rules and each time there is a consequence. Finally, Noodle and his mother have a chat about how rules keep people safe – from bullying, and keep things moving – like arriving at school on time so everyone can learn maths.

The books comes with some tips for parents (and educators). 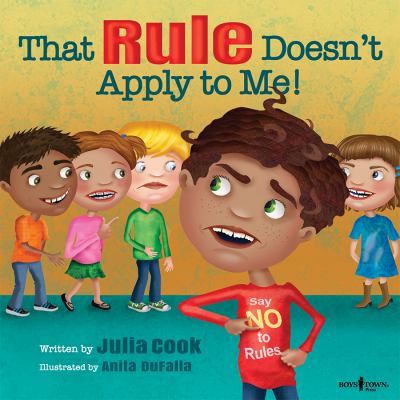 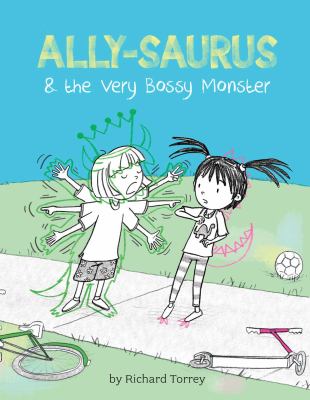 Ally, who thinks she is a dinosaur, and her friends must learn to deal with a new girl who wants everyone to play by her rules.

All children emulate the adults around them. An aspect of this is that they become the boss – they want to make the rules and tell others what to do. This book is about that phase where children are learning about making their own rules and demanding that others follow their rules. Maddie is new to a group of children and wants to dictate the way people play – when she comes up against opposition the rules become more specific to stamp out the opposition. She takes it too far eventually and her playmates rebel entirely. But, then Maddie comes back and modulates her behaviour to fit in with her playmates.

For children, rules can be very straightforward but as we get older we start to look at the information that is underpinning these rules and this is when we start to make decisions about fairness, bias, and how we are going to follow, or not follow, the rules that exist around us.

This is something we can talk to children about and give them opportunities to assist in the making of some rules.

The book above is a great example of a place to start with this discussion. We know as adults that rules change or laws change and we can look to history to know why but for children the connection to something they can understand – like rules around a game and being told how to play will make it much easier for them to understand. It’s a great place to start talking to children about how we can disagree with rules and can lobby for change.

How Do We Learn?

How do we teach children the importance of rules without anyone getting into trouble?

The answer is in something yummy…cooking.

Okay, there are lots of answers but I’m on a bit of a roll with the cooking and it’s actually a really fun way to discuss rules.

To start…we have rules when we cook. We have rules about how to measure – level tablespoon and heaped tablespoon are different and while this might not feel like a rule in the traditional sense of a rule, it is. If we compare it to moving, walk (use a level tablespoon) is the rule – so, when we run we are breaking this rule (just like if we use a heaped tablespoon). We are not following the rules of the recipe and there will be consequences (being told off for running) or a food that doesn’t taste right.

This is the big thing with rules for kids – there are consequences to their actions and these consequences are easily seen in a recipe.

Below are two recipes, you do need to make the rule-less recipe first or you remember what to do.

It’s important to let kids take the lead here as adults tend to have a good idea of proportions if they cook regularly.

Which ones tasted better?

I would love to hear from anyone for whom the rule-less version tasted better. The chances are though, that the one with rules (measurements, instructions, timings, etc.) will end up tasting better.

That’s why we have rules, just like we want to make yummy chocolate chip biscuits (this recipe comes from one of my mother’s scrapbooked cookbooks) we like society, the dinner table, the classroom, the play/sports ground, and other environments to be governed by fairness and we look to rules to help provide that fairness.