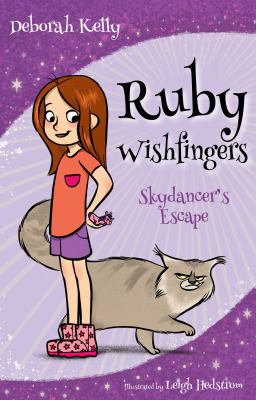 This book fits the model of things like Billie B Brown and Hey Jack in that it is short and suited for children who are moving into chapter books but aren’t ready for reading longer kids books on their own. I read this with my seven year old niece on a recent holiday up to Geraldton. We took turns reading while we were driving and at other times. She quite enjoyed the book and there were several times when she asked to read more.

I imagine this book is going to be turned into a series and I enjoyed the premise, and I’m sure I will read the other with my niece given the enjoyment we got from this. Ruby Wishfingers doesn’t want to be ordinary, and with a name like Wishfingers, she doesn’t think she should be. Then we learn that she is not as ordinary as we thought. With her parents out, her Grandmother aware of what her extraordinary power is, and the freedom to try out her powers and to make mistakes this is an enjoyable book. Ruby makes mistakes, a series of them, but she tries to fix them independently and children will see her problem solving. In the end, SPOILERS, she doesn’t necessarily fix everything but she’s done it on her own.

This is a very powerful message for children and something you see a lot in children’s books. They are in a situation where there might not be a handy adult to ask (Ruby could go to her Nana but she does it on her own for a lot of the book) and they are given the opportunity to make and solve problems on their own. It’s not new, if you think about the books you read as a kid (Harry Potter – they are all off at a boarding school and even though they have adult supervision it’s about them sorting things out on their own a lot. Enid Blyton – all of the crime solving groups were out there on their own). While this might not be a good model for parenting, it is a powerful message to children about their own abilities and the fact that they might be kids but they aren’t powerless and they can solve problems themselves.

After we had finished, my niece did comment that if Ruby had have stopped earlier when she had more wishes left, or asked for help, she wouldn’t have had as much trouble. But, perhaps it wouldn’t have been as enjoyable.

My niece’s verdict: “It was awesome” and she did grab the book to read independently after we had finished.

My verdict: Good early chapter book, nice characters, good premise, and I think children will enjoy following Ruby through more adventures. This is not a book for older children though and I think it’s range is 6-8/9 years. So, I will give this 4/5 stars.