Children’s Book Week Review – Argh! There’s a skeleton inside you!

CHILDREN’S BOOK WEEK REVIEW – Argh! There’s a skeleton inside you!

CHILDREN’S BOOK COUNCIL OF AUSTRALIA’S BOOK OF THE YEAR –

Blurb: Quog and Oort are on their way to Kevin’s birthday party. Unfortunately, their spaceship has crashed. Pick up this book to lend them a hand!

An interstellar exploration of hands and what’s inside them, from the award-winning duo who created Do not lick this book. 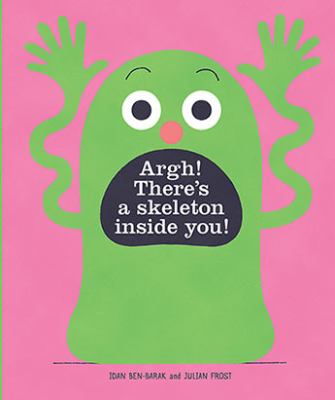 I absolutely love the way that this book is written!

Argh! There’s a skeleton inside you is written in a interactive way that really draws the reader in. You have to participate in the story in order to progress throught the pages and it teaches you all about your skeleton, muscles and nerves and how they work for you. The little aliens, Quog and Oort are so cute and friendly, that even an adult reader can’t help but be captured by the story and lessons therein. I also really love the final pages: “How to grow hands”.

Idan Ben-Barak holds a BSc in medical science, an MSc in microbiology, and a PhD in the history and philosophy of science. His first book, Small Wonders: How Microbes Rule Our World has been published around the world and won the 2010 American Association for the Advancement of Science/Subaru SB&F (Science Books and Films) Prize for Excellence in Science Books, Young Adult category. An excerpt from his book, Why Aren’t We Dead Yet? The Survivor’s Guide to the Immune System, was runner-up for the 2015 Bragg UNSW Press Prize for Science Writing. Idan lives in Melbourne with his wife and two children.

Julian Frost is an illustrator, designer and animator. He received worldwide acclaim for his animation ‘Dumb Ways to Die’ which has had close to 150 million views since it was uploaded on YouTube in 2012. With his illustration work for kids, Julian loves using likeable silliness in the service of communicating serious information. He lives in Melbourne.

Check out the ‘Dumb Ways to Die’ video below:

Note to grown-ups – this video contains stylised cartoon violence and may not be suitable for young children.

Review – Once Upon A Small Rhinoceros