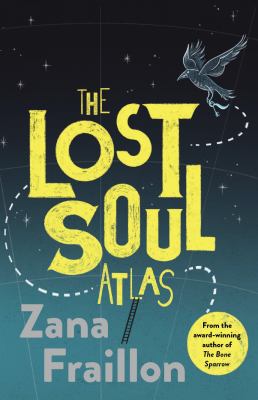 This book was part of the Shortlist for the Children’s Book Council of Australia’s Book of the Year Awards – Older Readers.

Twig is all alone after his dad goes missing. But when he meets Flea, a cheerful pickpocket, the pair become fast friends. Together, Twig and Flea raise themselves on the crime-ridden streets, taking what they need and giving the rest to the even-poorer. Life is good, as long as they have each other. But then Twig wakes up in the Afterlife. With just a handful of vague memories, a key, a raven, and a mysterious atlas to guide him, he tries to piece together what happened, and to find his way home…

I love this book.

The writing is gorgeous. The story is sweet and thoughtful and incredibly well-plotted.

I want this to win the Children’s Book Council of Australia’s Book of the Year – Older Readers award. Though, I am still confused as to how it ended up on the older reader list instead of the younger readers list.

Book of the Year: Older Readers

Entries in this category may be fiction, drama or poetry and should be appropriate in style and content for readers in their secondary years of schooling. Ages 13-18 years.

Note: Books in this category are for mature readers and some may deal with particularly challenging themes including violence and suicide. Parental guidance is recommended

Entries in this category may be fiction, drama or poetry and should be appropriate in style and content for readers from the middle to upper primary years. 7-12 years.

Some of the titles in this category may only be suitable for readers who are in the upper primary years as they contain mature themes, including violence. Parental guidance is recommended.

Having read the book I cannot understand how it has been classified into the 13-18 age group; none of the flags that may move a book up to YA; content, sex, language, etc.

I would actually recommend this to any readers aged 10 and over, I am going to try and get my eleven-year-old niece to read it.

Having said that the main character does die and travel to the afterlife but that doesn’t change my recommendation.

Now that I’ve vented, let’s get into the review.

I loved the premise of the afterlife as presented in this book – it’s so interesting that mortal memories are a commodity and that they have been stolen from the dead. This sets up the whole premise of the book – Twig fights the forgetting and finds himself with a Lost Soul Atlas.

The Lost Soul Atlas is a map of the afterlife and the passages where the dead used to be able to push messages through to the alive world. But these have fallen into disuse and have closed. Twig is given the mission of opening them with six bones full of memories – full of story lines.

The lines of knowing/the story lines reminded me of all of the stories displaced by history, the Aboriginal and Torres Strait Islander people, the refugee people; the people who did not get to write history. Which ties into Twig because Twig is homeless, Twig is disenfranchised and lives a life that I have never known.

From the beginning of the book you aren’t sure of the world that Twig lives in – the author says it’s not a real place but the nod in some of the place names certainly invokes Australia and Melbourne though not the one you might be familiar with.

The book alternates between Twig’s mortal life and his afterlife quest. Both stories are told linearly and the transition between them is woven into the plot very well – every time Twig sends a bone into the mortal world we learn more about him – that the swapping plot lines don’t feel forced or onerous.

The book is well-paced, neither part of the story drags and the world-building is quick and netted over the book so you learn as you go which is much nicer than dense world-building you see in some fantasy/sci-fi books. In addition, that way of doing it allows the reader to make assumptions, connect to their own world and experiences and then find out things that challenge those assumptions and connections which is one of the best things about this book. Twig is homeless but that is only one part of his character: he is also an amazing person surrounded by a non-traditional family and the world around him is interesting and vibrant and the way he looks at the world is fascinating.

We first meet Twig with his father and that relationship is central to the book because Twig’s dad disappears and he’s not sure what has happened (we know but we hope along with Twig). The world that Twig inhabits with his father is obviously one with difficulties but that is not what Twig or his father look at – they fill their world with stories and fairy tales. They talk about fantastical things and see the world as being more than it is.

When Twig’s Da disappears he find another family with Flea, and Flea’s group who all live at the graveyard. This group goes out and finds ways to live their lives and get by and in this we see the other side of interactions we might have. But there is something negative on the horizon in his life that eventually leads him to his death and afterlife.

I really wasn’t sure about this book – I have heard so many wonderful things about Zara Frallion’s other work and the premise looked interesting but I was hesitant because I thought it might be depressing or a hard read and it wasn’t at all. Yes, bad things happen but the story is really one of hope and love and friendship and no matter what is happening the Twig, his dad, the other kids, and Flea are all people you root for. Twig always tries to do the right thing, Flea is more practical than Twig, the raven will be a nice surprise and Twig’s Da is loving and his presence is always there with Twig.

From the moment I started this book I was hooked and I read it quickly – looking forward to picking it up again when I had the chance. I am definitely going to go out and try more of Fraillion’s work.

As I mentioned I would suggest this book to everyone aged 10 and older (and definitely teens and adults out there will enjoy it).

I cannot think of anything about this book that I didn’t thoroughly enjoy so I’m giving it 5/5 stars.