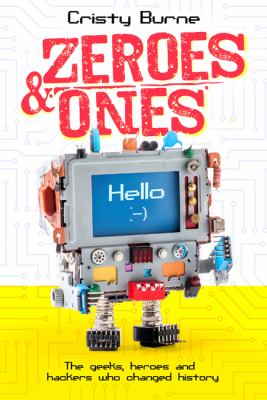 Zeroes & Ones written by Cristy Burne has been nominated as a Notable Book the Children’s Book Council of Australia awards for 2019.

Cristy Burne is an Australian science writer and author of seven children’s books. She has also worked as a science circus performer, garbage analyst and atom-smashing reporter, and currently teaches at Curtin University here in Western Australia.

From Zeroes & Ones by Cristy Burne

Just 50 years ago, there was no such this as email. Or wi-fi. Or the interntet.
There were no smartphones, no game consoles, no digital cameras.
Computers were the size of houses.

The subtitle of this book really gives you more of an idea of what it is about.
“The geeks, heroes and hackers who changed history”
The book is packed full of facts, details and anecdotes about every facet of computer invention and innovation from the 1800’s to now.
From Charles Babbage and Ada Lovelace’s Difference Engine and Analytical Engines to Quantum computing that will theoretically be faster than any computer ever made.

The book outlines in vivid eye-catching text boxes the challenges and ideals of all of the biggest names in computing including Steve Jobs, Elon Musk, Steve Wozniak, Bill Gates, Alan Turing, Mark Zuckerberg and many more important but maybe not so well known inventors, creators, mathematicians and scientists.

There are also some excellent quotes to make us snicker:

“There’s just not that many videos I want to watch.” Steve Chen, co-founder of YouTube, 2005.
“I swore off computers for a while, and I tried to be normal …Instead I read biographies of Napoleon and novels like Catcher in the Rye.” Bill Gates.
“Everyone’s always asking me when Apple will come out with a cell phone. My answer is, ‘Probably never.'” David Pogue, The New York Times blog, 2006.

This book is well suited to upper primary and high school students as well as adults who enjoy some fresh trivia. A fantastic resource for those doing research assignments on anyone from the technological world.

Hi there. I am a Library Officer at the beautiful Success Public Library. Come on in to the library and say Hi, I am always happy to meet new people.

Pram Jam with Beth – Call and Response Songs and Books