Ancestry: Stories of Multicultural ANZACs by Robyn Siers and Carlie Walker, part of the Century of Service series. 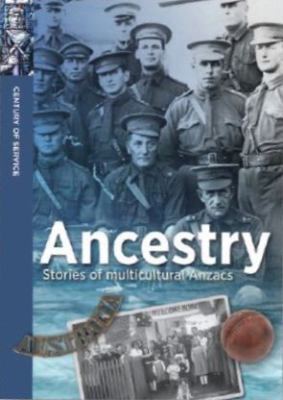 Ancestry: Stories of Multicultural ANZACs  is an Honour Book for this year’s Children’s Book Council of Australia’s Book of the Year – Eve Pownall Award for Information Books.

This is the newest in a series of books published by the Department of Veterans’ Affairs in association with the Australian War Memorial. This book deals with the backgrounds of some of the soldiers – whether it is people born in other countries like Maori Private Karanema Pohatu, people like Captain Marcel Aurousseau whose family moved to Australia in the 1800s. We talk about multicultuiralism a lot in Australia but I really appreciated this look at the multicultural history of Australia in specific connection to the men and women who served in the military.

The book starts with infroamtion about Honorary Captain Charles Bean who was Australia’s first official War Correspondent and who travelled to Egypt with the first Australians to document their training and their time at war. He keep meticulous notes and was involved in the creation of the Australian War Memorial in Canberra.

This book covered a number of different people from different backgrounds – each person/family given one, or two, double page spreads with pictures that relate to their story of both people and artefacts.

One family – the Coriglianos family moved to Australia from Sicily in 1876 and the section tells of four sons who went off to war, and one son-in-law.

Another example is Lieutenant Leonard Keyzor who was born to a Jewish family ion England and lived for ten years in Canada before moving to Australia and then joining the 1st Battalion. He was award the Victoria Cross.

And another family – the Langtips, Chin Langtip moved from China to Australia in 1856. Six of his sons volunteered to join the war and four did. This section talks about the 1909 Defence Act which limited service to people of “substantial European descent” and the fact that some people volunteering had to bend the truth to be allowed to do so. All four sons returned from war, and one served in the second world war with his son.

The book is filled with sections of information that adds to the individual stories and also asks questions of the reader about the pictures/artefacts that have been mentioned as well as the person/family that is being discussed.

I like the set out of this book and the fact that each person or family is given their own focussed section. The text is informative but not overly long. At the end of the book there is a map showing where each of the featured people came from. Followed by a glossary, references and further reading.

This text is for upper primary and high school aged student or adults. I found it very interesting and am giving it a 5 out of 5.

Zootopia: Entertainment for the whole family