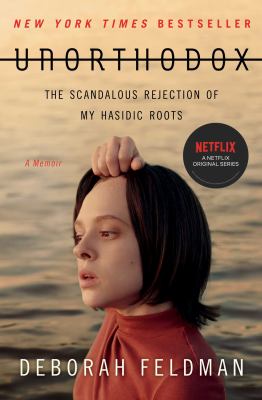 Unorthodox is a 2020 Netflix TV series described as “a Hasidic Jewish woman in Brooklyn flees to Berlin from an arranged marriage and is taken in by a group of musicians — until her past comes calling.” But before this hit series, there was the book that it is based on – Unorthodox : the scandalous rejection of my Hasidic roots by Deborah Feldman.

I found the series intriguing (and was also fascinated by the behind-the-scenes Making Unorthodox) so I was excited to read the book and learn more about the people involved, and how the two portrayals differed.

The story of a young woman leaving the strict Satmar sect of Hasidic Judaism, where everything from clothes to reading materials to spouses is controlled, is a quest for independence and freedom. Depictions of Hasidic practices had me Googling the reasons behind them and learning new information about a group I knew very little about. The scenes brought to life in the series, such as the wedding, were both visually stunning and thought-provoking.

There are a number of differences between the book and the TV show – it is very much a ‘based on’ situation. The main character has a different name, age, interests, time spent married and more… yet her story and her spirit remain the same. Devoirah/Deborah/Esty is an intelligent, strong woman who does not accept the role she has been given and raised for. You can read more about the differences between the show and the book in this article from The Washington Post.

I recommend both the book and the TV series. If you are only choosing one, then this is the rare case that I will say TV! The visual representations and perfect acting (particularly by the captivating Shira Haas) make this series a binge-worthy must-see.

You can borrow the book from Cockburn Libraries in print, or via oUr ebook apps below

I've been working at Cockburn Libraries since 2014. I enjoy spending time with my family and friends, Thermomixing, camping and reading (of course!!). Most recent library loans: 'The dry' and 'Suitcase of dreams'.

Welcome to the National Year of Reading #NYR12

For the Attention of: Associations & Clubs – Members, Committees & Officers