The Queen’s Gambit is a hugely popular Netflix series but did you know that it is based on a 1983 book? After watching (and loving!) the series, I had to reserve a copy from the libraries immediately. You can reserve The Queen’s Gambit by Walter Tevis from Cockburn Libraries in print, or listen to the e-audiobook using BorrowBox or Overdrive. 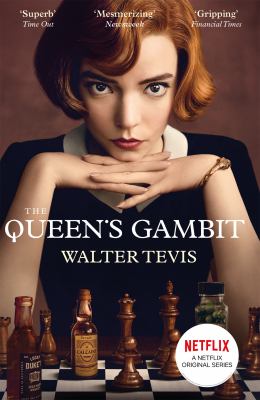 The series follows the same storyline as the book – chess prodigy with an addictive/compulsive personality becomes a champion of the game. Young Beth Harmon learns to play chess from the orphanage janitor, while developing a dependence on the tranquilisers given to the children daily (yes, this really happened during the 50s!). She goes on to rise to the top of her game, travelling the world to win chess championships, usually against all men.

The relationships in this story are well-written and realistic. Beth spends many years in the orphanage before she is adopted by Alma Wheatley, a woman with issues and addictions of her own who provides Beth with a home and the opportunity to compete professionally in chess. The two share a bond that extends beyond that which would be expected of a teenage adoptee and parent. The connections between Beth and her friends, particularly Jolene and Benny, are also portrayed in an authentic way and I enjoyed seeing them grow.

One of my favourite parts of the series was the development of Beth’s fashion style. As she earns more money, she buys beautiful 60s outfits and makes changes to her hair and makeup which are great to see on the screen. She is more confident in the show and played by the stunning Anya Taylor-Jones, but in the book she is described as ugly and plain.

Both the book and the TV series deserve their popularity and I recommend them, even if you have never played chess!

This author has had a number of books adapted into movies: The Hustler, The Colour of Money, and The Man Who Fell to Earth.

Vote for the books that defines Australia