Press the Eject and Give Me the Tape

Two novels, both with cassette tapes on the covers. Two reviews. You belong here by Laurie Steed & Tape by Steven Camden.

Okay, so when you see a cassette tape on the cover of a book, you know that you are going back in time to the 1970s, 1980s or early 1990s, and you know there is going to be musical references. And so it is with these two books:  You belong here by Laurie Steed and Tape by Steven Camden.

So put the tape in the stereo, press play, and let’s start Side A of this review.

Side A: You belong here by Laurie Steed Set in the past and musical references. Check!

The debut novel from Western Australian author Laurie Steed is a family drama spanning thirty years of the Slater family – mum, dad and three kids: Jay, Emily and Alex.   Starting in 1972, but it’s the eighties and nineties that take up the bulk of the story, which ends in 2002; there’s a coda chapter set in 2015. The novel is mostly set in Perth, with lots of Perth references you’ll identify with, especially if you’ve ever hung around Beaufort St in the Mt Lawley/Inglewood area. It’s a drama, but there are bits of wry humour, such as when one of the family gets a job at a Laurie Potter gym – “…it was different from most gyms in that it offered lifetime memberships…”.

And music references; music plays an important role as the siblings grow up, and the book references the kids’ musical loves, from opening song on the compilation tape Just Hits ’85 –  Dire Straits’ Money for Nothing, to PJ Harvey, to Nine Inch Nails – if you listened to The Downward Spiral in your youth,  then this is the novel for you.

You belong here traverses the family relationship; between parents and between siblings over 2o years through functional and not so functional times. It has those little moments of childhood, that you’ve probably experienced – “…so he ate Milo from the tin until his mouth went dry”. The interactions between siblings captures the changing relationships you have with your siblings as you all grow up and get to different stages of your lives.

… then you should read this novel.

Stop. End of Side A

Side B: Tape by Steven Camden

Based on the cover of Tape, and, of course, its title, we know we are going back in time and so we first find ourselves in 1993 (I just saved you having to look up when John Major was British Prime Minister) with Ryan. What about music references, yep, got those. You’d better brush up on your A Tribe called Quest knowledge, the first album at least.

Tape is nominally this is a Young Adult novel, mainly because the two main characters are teenagers, but don’t let the YA label put you off – we’ve all been teenagers. The novel switches between Ryan’s story and Ameliah’s story (both in the third person) every few pages; the change in character designated by a pause button. You know that at some point Ryan and Ameliah’s stories are going to intersect, but how and when is probably not what you first expected.  And that is what will keep you interested until the very end. You could say it’s story about young love, but it’s also, like You belong here, a story about family – children and parents.

… then you should read this novel.

Stop. End of Side B. 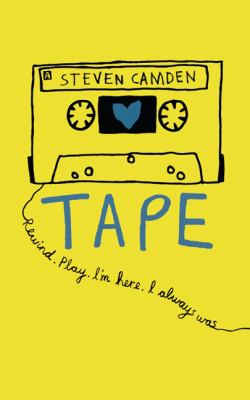 Press eject and give me the tape.