Milk isn’t that interesting. Or is it?

Editor’s Foreword – from the September 2018 edition of Good Reading Magazine.

My roll with non-fiction books continues this month. I have been reading Milk: A 10,000-year food fracas by Mark Kurlansky. You may have read books by this author before. He has a fascination for writing about just one thing. In this instance it’s milk, but previously it has been paper, cod and salt.

Now you wouldn’t think milk could be that interesting, but it can be!

There are so many products that originate with milk such as whey, all the different types of cheeses, yoghurt and butter. Oh, and of course ice-cream! And there are so many different animals that provide milk, all mammals of course.

The first thing I learned from reading Milk was that it is a misconception that people who cannot tolerate milk have something wrong with them. In truth, the condition of lactose intolerance is a natural condition of all mammals. Humans are the only mammals that consume milk past weaning. Out in the natural world, babies of mammals only nurse until they’re ready for proper food, then a gene steps in to shut down their ability to digest milk. But for humans it all depends on your ancestry.Those who are European, Middle Eastern, North African, or from the Indian subcontinent lack this gene, so are able to drink milk into adulthood. 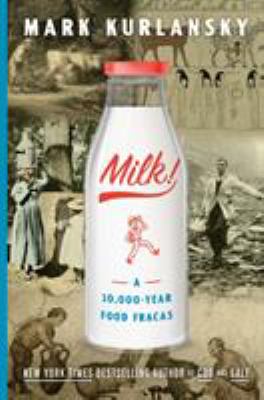 Some wet nurses are closet drinkers!

Wet nurses were popular throughout history. Bottle-feeding was not common in medieval Europe. It was widely thought that a baby nursed on animal milk would grow up to be less intelligent. But wet nurses had their problems too … some were closet drinkers, some would secretly supplement their milk with goat’s milk. Although in the 1500s in France, if a mother couldn’t breastfeed her baby, the goats came to the rescue. There was an old belief that babies took on the traits of their wet nurse. If that was a goat, they would become sure-footed.

Northern Europe was where the big dairy consumers resided. The Dutch were called ‘cheese heads’ as they endlessly engorged themselves on milk, butter and cheese. You’d have to wonder about their cholesterol levels.

In the Middle Ages in Ireland, butter was an expensive commodity. Only affluent people owned livestock and they buried their butter in peat bogs like rare treasure. The Celts made soft and hard cheeses.

…tells of a man named Furbaide who plotted to kill Queen Medb. The queen bathed in a well on an island every day. Furbaide planted a stick in the ground near the well at just the right height, tied a rope of just the right length to it, and stretched the rope to a spot where he was hiding on the mainland. Then he took a slingshot and aimed along the rope towards the stick, practising until he mastered his aim. And then one day there was the queen, bathing in the well with her head sticking out, her forehead exposed. With no time to find the perfect stone, Furbaide grabbed the first thing he could find, a piece of hard cheese, and fired. He hit his target perfectly and killed the queen.

The Mongols drank milk from horses. Due to the difficulty of milking horses, this was men’s work, compared to other cultures who milked cows, which was always women’s work. The desert nomads, known as the Bedouins, were dependent on milk. Bedouins were devout Sunni Muslims but built no mosques, prayed facing Mecca in the open desert, spoke their own language and belonged to no country. At times their diet consisted wholly of camel’s milk. Camels can eat a camel-thorn salt bush, something few animals would find pleasant or digestible. As this spiky shrub has roots that are soaked in salt, the camel’s milk is salty. But if the camel’s salt intake is lowered, it produces less milk, so the Bedouins were happy to drink salty milk.

There are over 100 recipes in Kurlansky’s book.

A lot of them use rennet. I had to look this one up as I had no idea what it was. Vegans, or squeamish cheese lovers, this is the time to skip a paragraph … I discovered rennet is a set of enzymes produced in the stomachs of mammals that acquire nutrients from plant-based food by fermenting them in their tummies prior to digesting them. This substance extracted from the digestive systems of calves and goats is used in the making of most cheeses.

Truly, milk is a most interesting subject.

Read more of Rowena’s posts and find heaps of other Book News and Podcasts on the Good Reading Website!

When Chasey the Black Cockatoo met the Mayor

May the fourth be with you.