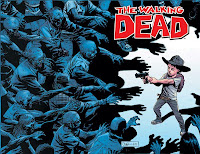 Hands up if you’re sick of vampires? I mean, honestly. Working in a library I get to see a ridiculous amount of vampire novels rush off the shelves. Twilight, Sookie Stackhouse, Vampire Diaries, Vampire Academy, Anita Blake – Vampire Hunter, The Vampire the Witch and the wardrobe, Harry Potter and the Vampire’s vampire vampire …ENOUGH ALREADY!
Why isn’t it time for some of the other undead to get some attention? OK, so they may not be quite as desirable and mysterious and brooding as the characters of the books above what with the rotting flesh and dismembered limbs and all (sooo superficial) but, hey, zombies need love too you know. Which brings me to my point and yes, I do have one…
What with this post falling right on Halloween (I may be A LITTLE behind my posting schedule), with me promising to highlight a mature readers GN and with the TV Series just launching on US cable, now is the PERFECT time to be spotlighting Robert Kirkmans’ series “The Walking Dead.”
Published by Image comics, The Walking Dead is probably THE success story of independent comics. The Walking Dead hit the ground running, or rather staggering (HA!..er..anyway) and has been growing steadily in popularity since #1 came out in 2003. The first episode of the TV series aired in the US on October 31st and looks to be a huge hit critically and commercially. The series won the Eisner for best ongoing series last year and is constantly hyped amongst fans as one of THE best ongoing series out right now.
So the main character is a vampire who despite his outwardly brooding appearance just wants to be lov…nope, this is about zombies and lots of em! A Zombie Apocalypse has gone down (I don’t know why i felt the need to capitalise that but there you go) and the series focuses on a band of survivors led by police chief Rick Grimes. I’ve heard that its not really about the zombies but about the relationships between the characters…but I’m sure there’s still a lot of zombie fightin’ going down. (Yeah, I haven’t read it. Not my thing..not enough underpants being worn on the outside of ones costume for me.)

Hi, I'm Cockburn Libraries. My posts will usually be of a general nature and will be on topics such as the Libraries' opening times during holiday periods and information about our various services. You may also find me posting on behalf of our work experience students and casual staff members. Come and visit me soon.

How Paddington started – It all started when a kid died