How a 3 kilogram tin of pineapple lead to reading the fantasy novel,  The house of shattered wings by Aliette de Bodard.

The three kilogram tin of pineapple pieces – a joke Christmas present – had been sitting on my kitchen bench for over a year,  so, finally, I took the plunge and opened it, but needed to find a few good recipes that included pineapple, because, well.., that’s a lot of pineapple.

A recipe for pineapple and chocolate brownies

Enough about brownies, what about the book?

Set in a crumbling, war-torn Paris, post the Great Houses War,  The house of shattered wings focuses on the House of Silverspires, a sort of community of people living under one roof (a “motley band”) , lead by Selene. Selene took charge of the House when the House’s founder, the mysterious Morningstar, a Fallen angel, disappeared  20 years ago.  You know early on, what did or didn’t happened to Morningstar is going to come to light and play some part towards the climax of the book).

So there’s magic, and spells, and the Fallen (the angels cast from Heaven, who seem to have the most power and strongest magic on Earth), … and then some unexplained deaths. 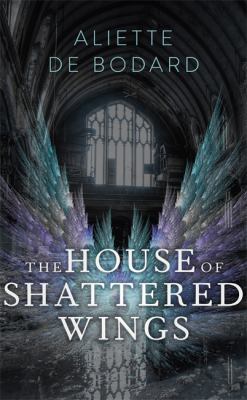 While the story unfolds from various characters perspectives, early on we discover most of what’s happening through  Philippe, who brings some Eastern magic to proceedings (“He was the only Viet in a sea of white faces“), as he is brought into the House of Silverspere as a sort of prisoner. He seems the most interesting character, though others do come to the fore towards the end of the book. He also leads us to the dragons (in sort of human form) which appear, relatively briefly, in the middle of the book.

While the murder/mystery element is talked up on the back cover, finding out whodunit seemed less important than the machinations of the Houses dealing with the threat and each other, oh, and finding out what the deal is with Morningstar’s 20 year absence. This book is the first in the Dominion of the Fallen series, and it won the 2015 British Science Fiction Association Award for Best Novel.

Worth a read if you like your angels dark and murderous (no fluffy white clouds here).

What do you do with 3kg of pineapple pieces? Make brownies.   Then read a book.

Summary The pineapple chocolate brownies where excellent - you must try the recipe. The novel, definitely worth a read.

The Guy, The Girl, The Artist And His EX – Review