Hey there! Long time, no see. Well, summer is officially here so what better time for an anime update?

I’d like to say I have a bunch of summer themed anime to spruik but, actually, I missed my window to post a special Halloween update so I have an excellent selection of spooky, supernatural and downright horrifying titles instead!

In order of horrific-ness, from light and comedic supernatural fantasy to blood-chilling and/or blood-splattering horror: 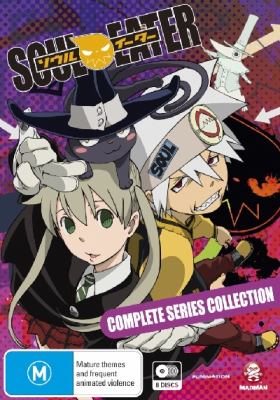 “Maka is a Meister and Soul is her Weapon. As students at the Grim Reaper’s Death Weapon Meister Academy, their study habits couldn’t be more different. But in battle against the supernatural forces of evil, they’re a freakin’ lethal team. That’s when Maka unleashes the merciless slayer within and when Soul transforms – literally – into a razor-sharp scythe! Every defeated wicked soul he sucks down makes this team more deadly!”

The devil is a part-timer!

“When Satan is run out of his infernal kingdom, he finds himself virtually powerless in modern-day Tokyo. Stuck in a feeble mortal body and desperate for cash, there’s only one way for a dark lord to survive: by getting a job manning the deep fryer at “MgRonald’s”!”

“Five years ago, there was a string of grisly murders that shook the city to its core…and in the present, psychic echoes reverbrate. Everyone knows about Boogiepop: meet her one dark night and you are taken. People tell each other stories and laugh: no one believes that she may exist in this day and age. Still, there are some strange things that appear to be going on just below the surface”

“The ability to see the threads that bind everything and to be able to destroy anything simply by severing them is known as the Mystic Eyes of Death Perception. Shiki has such a power, or rather, bears a curse that he must endure? Thankfully, he was given glasses that sealed this curse and has lived life normally … until now.”

“When citizens of a secluded village begin dying off in alarming numbers, the sole hospital’s head doctor tries desperately to save his patients. But his efforts are in vain. Entire families are wiped out while others desert their homes. All hell breaks loose as the villagers discover their loved ones’ corpses are rising from the grave with an insatiable thirst for human blood. Haunting, hallucinogenic and unnerving to the core, Shiki stares into the hearts of both the hunter and the hunted. Who is safe when the urge to kill in order to survive blurs the line between man and monster?”

“At the Yokota Air Force base in Japan, a nervous American military is on the brink of the Vietnam War. But a greater threat exists within the walls of the heavily guarded compound: vampires. A team of top-secret undercover agents dispatches a mysterious young woman to destroy them … She is the last remaining original.”

“Ganta is the only survivor after a mysterious man in red slaughters a classroom full of teenagers. He’s framed for the carnage, sentenced to die, and locked away in the most twisted prison ever built: Deadman Wonderland. Then it gets worse.”

“On a hot summer day in 1983, a transfer student named Maebara Keiichi comes to a peaceful rural village in Hinamizawa. There he befriends his classmates Rena, Mion, Rika, and Satoko. Just as Keiichi is beginning to assimilate into simple rural life, he stumbles upon the dark history of Hinamizawa – every year for the past four years, one person has been murdered and another has gone missing on the day of the Watanagashi Festival.”

It’s not all doom and gloom, however. Here are a few completely different titles to have a go at. Starting with the movie follow-up to one of my all time favourite series: Cowboy Bebop.

They’re Here To Save The Planet But Not For Free
“The year is 2071. When villains blow up a tanker truck on Highway One, a deadly virus is released, killing hundreds of innocent people. This is merely the beginning …
The reward for the bomber’s capture is massive and the crew of the Bebop would love to get their hands on it.”

Set some time around the 3/4 mark of the series this spin-off is a fitting, feature length, action packed adventure that sees our favourite bounty hunters caught up in a race against certain death.

“Spring marks the start of another new school year at a junior high school in Kamakura. A new transfer student, Ryoichi Kyogoku joins the 8th grade. Kyogoku has a very special proficiency in telepathy and has been ordered by his father to use this ability to scan other people’s minds and take over the school. He instantly gains popularity at school from his good looks and charisma and he sets about taking control of the school. As people begin to fall under Kyogoku’s spell, he covertly manipulates his followers and pushes aside anyone who gets in his way. With the school almost completely under the control of Kyogoku, only one boy seems unaffected – Seki. Does Seki have what it takes to save everyone from the clutches of mind control?”

“Make our dreams come true! Although u’s (the defending champions of the school idol tournament) plans to dissolve their group after the graduation of their senior members, they receive news that leads them to holding a concert event! The 9 girls continue to learn and grow in this new and unfamiliar world. What is the last thing that these girls can do as school idols? With the clock ticking, what kind of meaning will the u’s members find in performing this most exciting live performance?”

“In the near future, a meteorite carrying a foreign virus crashes in Japan, leading to a devastating nation-wide infection and total anarchy. Several years later, Shu (a teen with a special ability awakened by the Apocalypse Virus) meets a strange girl who incites him to join the struggle against a government organization’s robotic forces and a secret society whose goal remains shrouded in mystery.”

Mob Psycho 100 is a quirky and interesting little series about an average middle school boy named Shigeo Kageyama. He is so unnoticeably average that his nickname, Mob, is a slang word used by Japanese animators to mean “inconsequential/minor role character”.

Although he seems to be totally lacking any kind of presence he is, in fact, a powerful Esper. Mob realizes his psychic powers are dangerous, so to avoid his power getting out of control, he deliberately lives a sheltered life, suppressing all strong emotions. Mob wants to be a completely ordinary, normal kid, just like everyone else – but trouble seems to come to him.

Well, that’s all from me. These titles should keep you busy over the holidays, so have a happy and safe Christmas and New Year’s and I’ll catch you then. “Jaa ne”!

eBook – The Stand by Stephen King